The Amalfi coast is one of the most beautiful coastlines in the world; Villa la Madonnina is situated in the heart of it.

- Romantic valleys in walking distance from the Villa La Madonnina:

- Close: Grotta di Smeraldo (arguably as beautiful as the Blue Grotto on Capri)

– The Amalfi coast is a hiking paradise (see the hiking section)

The famous Amalfi Coast is one of the most beautiful coastlines in the world. Selected as one of the 10 “Paradise Found” by National Geographic Traveller, no curious traveller should miss. Protected as a UNESCO world heritage site it has kept its natural charm and beauty with breath taking landscape, ancient towns untouched by modern architecture, natural diversity, excellent restaurants, very friendly people and the always present deep blue Mediterranean sea.

Ryan Shirley published a blog describing his TOP 10 Places on the Amalfi coast. The quality of the videos is very good and it gives a good overview: TOP 10 Places on the Amalfi coast
Our Villa la Madonnina is perfectly positioned for exploring the the places he describes. For those interested in history I suggest to visit the excavations at Pompeii, Ercolaneo and Paestum. 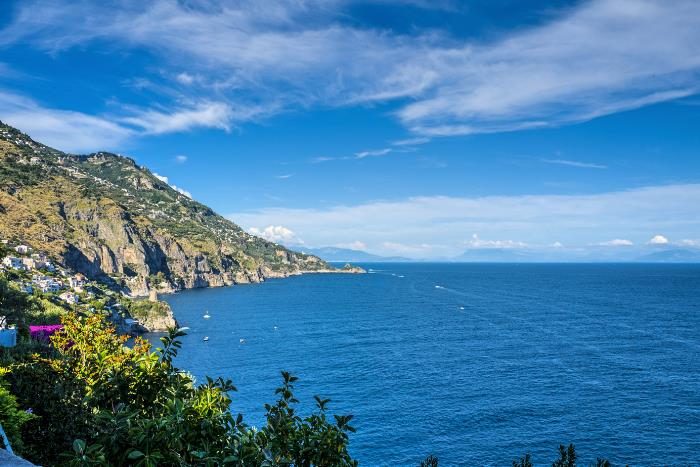 In the photo above you can see the beautiful surroundings of the Villa la Madonnina.

Here a description of the highlights of the Amalfi coast:

from the villa and are among the most beautiful natural highlights of the whole Amalfi/Positano coast. Both are deep ravines in the rugged coastline. Both were fishing villages since early days. For Marina di Praia this is true also today.

is a romantic and scenic valley with a small beach. Marina di Praia was the (fishing) port for the community of Praiano, which is positioned higher up on the mountain along the road. Today only few fishermen do fishing for their living, most for recreation. You see them in the morning with their rowing boats in front of the villa lowering their nets into the sea. In Marina di Praia you find several excellent restaurants run by families; you can rent a boat here, start excursions to Capri, go scuba diving and rent equipment for water sports. 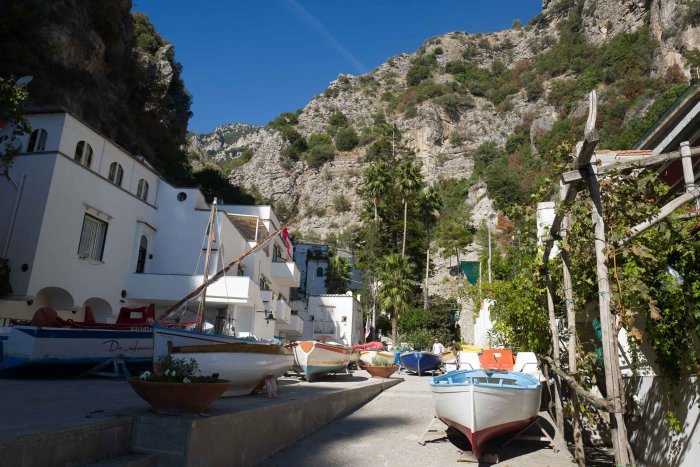 The medieval tower Torre a Mare, which is visible from the villa and was, built in the 13th century as a watchtower against the Saracens.

Going to the east (20 minutes walk) you find the fjord of Marina di Furore, which is worthwhile visiting not only for the landscape but also for its museum of the industrial history and its romantic role in the movie history.
A bridge spans the fiord, a narrow ravine with impressive steep walls on each side with picturesque former fisher houses nestled to the rocks.

At the bottom of the valley you find a small beach and a museum featuring the interesting industrial and movie history of the valley. There is also a good restaurant down in the valley.
Originally the sea reached far further into the valley – it was a real fjord – and was therefore a save port – the only shelter in case of in case of storms. But these characteristics made it also an ideal base for pirates. Later it was the port for Furore a hamlet 300 meter higher on the mountain. 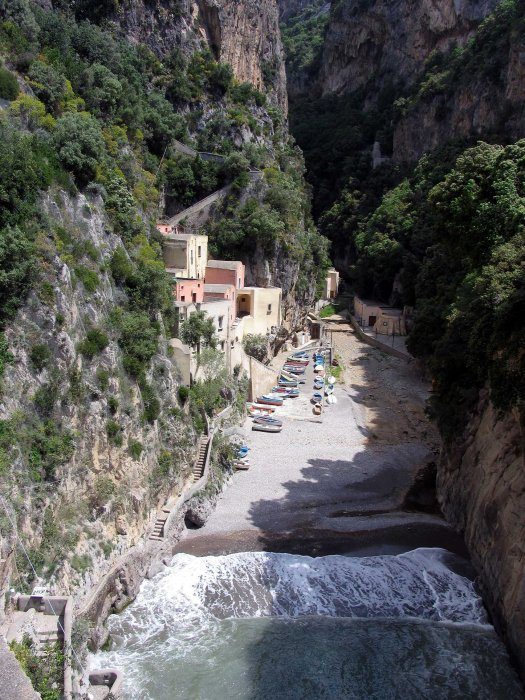 In the 17th and 18th century the easy access from the sea in connection with the water coming down from the mountains made it an ideal place for a couple of industries: mills for wheat, a bakery, paper production and lime kiln. In the museum down in the ravine you can see how intelligently these industries worked together. In the same building the water was first used to produce paper – made of old cloths- then one floor lower the power of the water was used for milling grain. The flower was the base for baking bread in the bakery. The heat of the oven was used to dry the paper and to heat the rooms of the miller on the top of the building.

In the valley you can also see limekilns using both the available lime and water. Wood for the fire was cut in the valley or brought by boat. Again the heat that is generated during the process was also used to dry the paper and the lime was also used to make the paper white. Today we would call this a vertically integrated industry. The port allowed an easy transport of the grain and wood to the valley and of the end products to the markets. All buildings are nicely restored and due to the efforts of the commune di Furore and the initiative of Paolo well maintained.

In the last century this valley became part of the movie history when the film director Roberto Rosellini shot there the movie “Amore” – his masterpiece. At that time he was in love with Anna Magnani, who was also the chief character in the movie. They both bought one of the tiny monazzeni (fishermen’s houses). One called the “casa del dottore” (the house of the doctor) and the other the “villa della storta” (the house of the sprain) which can be visited. But then letters from another actress, Ingrid Bergmann, arrived asking Roberto for a role in one of his films. When Anna learned this she got so upset that she threw a pot of spaghetti in Roberto’s face. The sad end of the story was that Ingrid took Anna’s place both in his movies and his heart. Anna then never visited her monazzeni again. 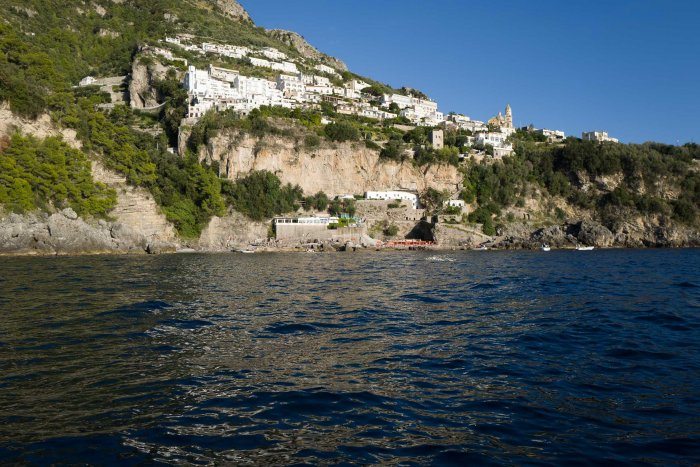 Only a few kilometres away towards Positano is the nearest village Praiano (2 km / 1,2 miles). Centuries ago the Dogi of the republic of Amalfi spent the summer here because of its fine climate and magnificent views. You find their beautiful old churches with majolica tiles and grocery and other shops.

“Praiano has a more authentically atmosphere, than its brasher neighbors” writes the Timesonline. Very true!
For more information see the excellent official web site of the Commune di Praiano: Praiano. When you click sites you find many very good photos from a Salvatore Scala a local photographer showing different angles of Praiano.

The “Grotta dello Smeraldo” in Conca di Marini (4 km/3 miles to the east) is a cave which is said to be as beautiful as the more famous Grotta Azzurra -the blue grotto- in Capri. The sunlight shines through an underwater tunnel and illuminates the grotto with an emerald light. Go there when the sun is high (around lunch time) and the sea is calm. Web site: Grotta dello Smeraldo 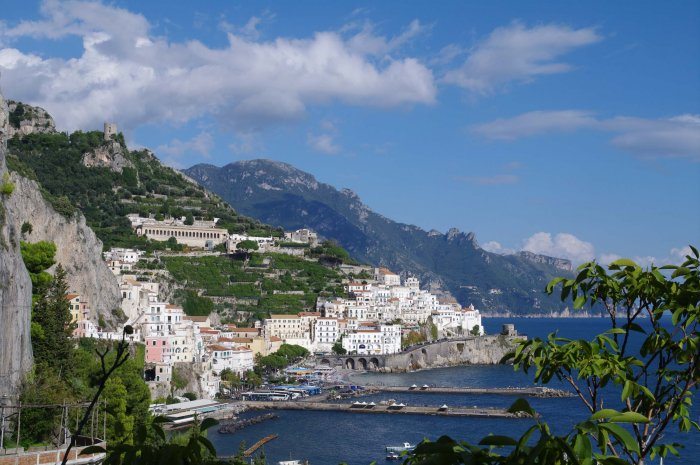 The famous towns along the coast all are very worthwhile to visit but have a very different character. A must is the visit the ancient town of Amalfi (8 km/5 miles) with its Duomo and Piazza and the narrow alleys – still the same as 800 years ago. At that time Amalfi was a leading Mediterranean power for two centuries. For more information see: Amalfi 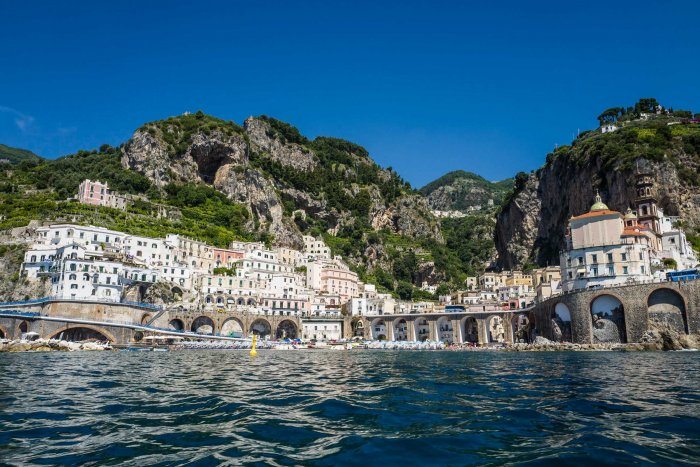 Very worth while to visit is Ravello (10 km / 6 miles) – not far from Amalfi  – with its fabulous gardens and villas and the Ravello music festival. The view down to the sea is spectacular! For more information see : Ravello 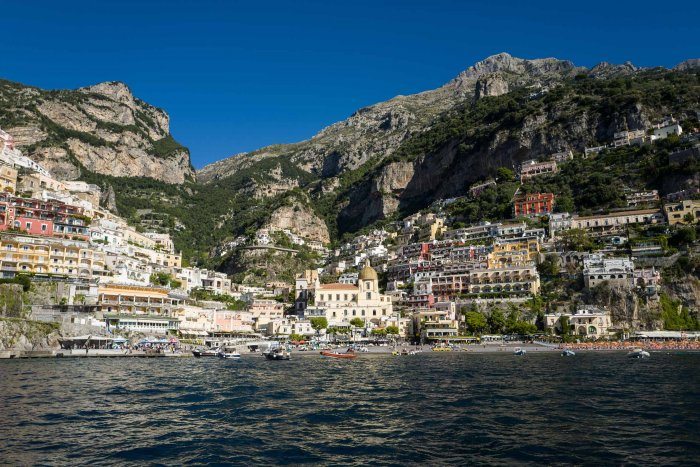 Also nearby is the famously beautiful Positano (11 km / 7 miles) – the vertical city that lives up to its reputation – at least from the outside! Instead of driving there or take a bus you can rent a rubber boat in nearby Marina di Praia and use the valley service at the port of Positano and then visit Positano. See here the information. For more information about Positano: Positano